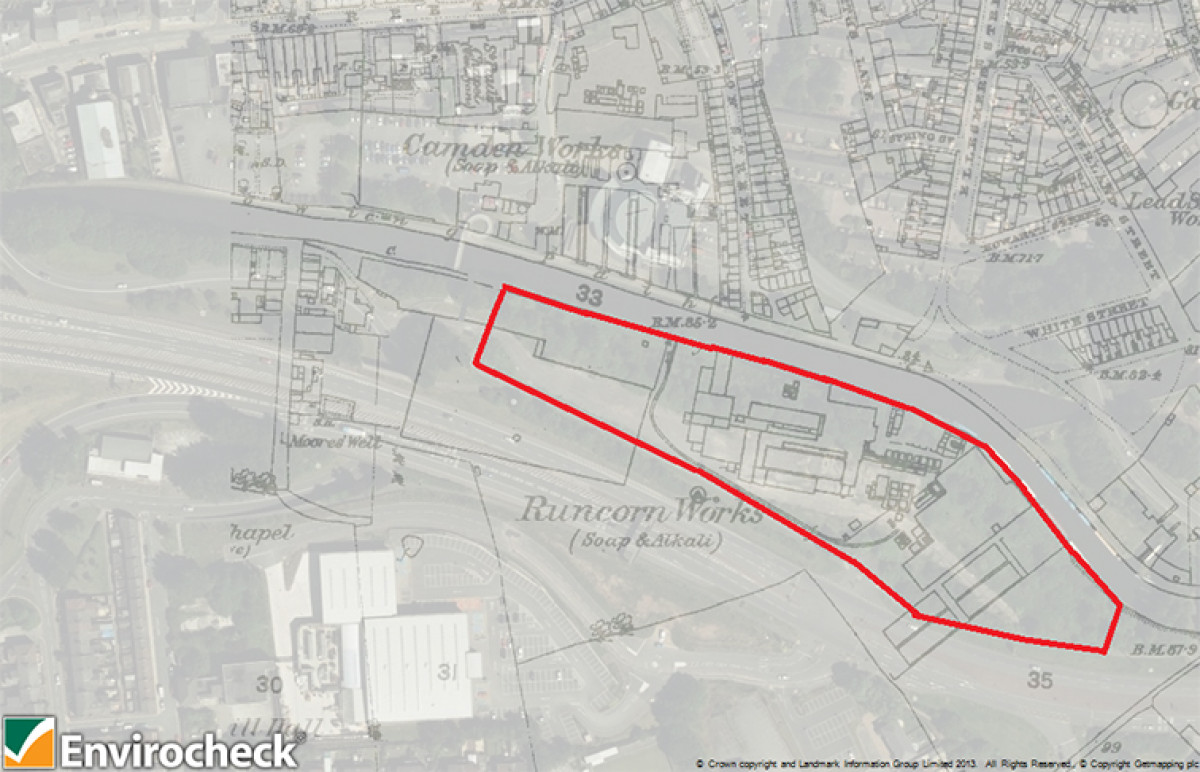 Our initial review led on to a full desk study of the site which revealed that it had been developed in 1807 as the Runcorn Soap and Alkali Works, which remained on site until 1927. The works produced bleach and washing soda (sodium carbonate) via the LeBlanc Process. This process utilised pyritic mudstone from North Wales to produce sulphuric acid that was boiled with brine from Cheshire to generate ‘salt cake’ (sodium sulphate) which was then reacted with coal and limestone from the Lancashire coal fields to produce the required product sodium carbonate. Unfortunately, this process was highly contaminative and generated around 2 to 4 tonnes of waste per tonne of product produced. This waste principally comprised calcium sulphide, which reacts in the environment to produce hydrated lime and releases hydrogen sulphide (rotten egg gas) along with arsenic-rich ash from the burning of the pyritic mudstone. This waste initially formed a spoil heap which was spread over the site in the 1930s to leave a 4 m thick cover of contaminated material known locally as “Galligu”. In the 1950s the site was redeveloped as a bus depot but was closed in the 1980s, partly as a resuilt of ongoing surface settlement of the Galligu

GEA was subsequently commissioned to carry out a ground investigation, which confirmed the Galligu to contain very high concentrations of arsenic and lead and to be strongly alkaline. The investigation also revealed the presence of a plume of hydrocarbon contamination emanating from the tank farm of the former bus depot. The hydrocarbons present within this plume were found to be relatively unweathered, as a result of the highly reducing conditions at the base of the Galligu and possibly also due to the high arsenic and pH level in the groundwater. In parts the Galligu had the consistency of toothpaste, whilst in other areas gypsum crystal growth had led to expansion of the Galligu and the development of zones of solid fused material.  Following an additional phase of investigation GEA liaised with the design team to formulate a remedial strategy to tackle the geotechnical and contaminated land issues posed by the Galligu. 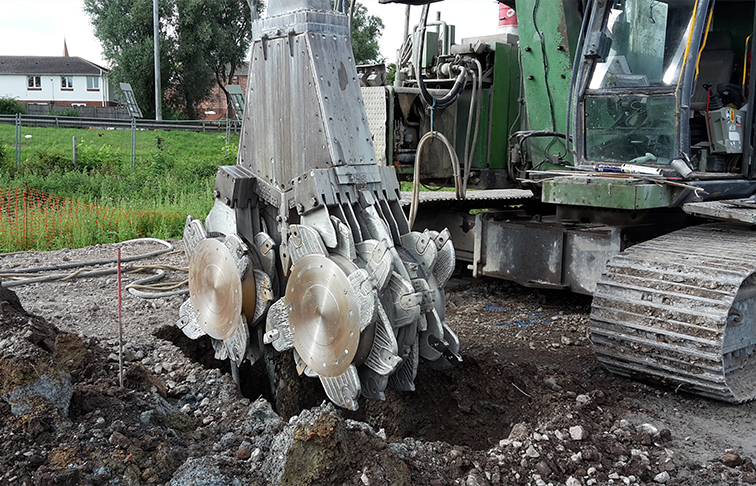 The loads from the proposed structures, the main roadways and the buried services were transferred to the underlying Glacial Till by columns of cement stabilised material via a transfer mattress of cement stabilised material which also formed an impermeable capping to the site. The landscaped areas were then formed of ‘clean’ imported material. This remedial solution eliminated the potential for human exposure to the contaminants and significantly reduced the potential for infiltration and leaching and the mobilisation of contaminants via the groundwater flow across the site. However, whilst the former tank farm was excavated to remove the hydrocarbon source, the plume of residual hydrocarbons at the base of the Galligu could not be economically excavated.

GEA worked in consultation with a specialist remediation contractor, Regenesis, to design a remedial scheme based on the installation of a ‘curtain wall’ of activated carbon to adsorb and retard the off-site migration of the hydrocarbons. This wall was formed using Regenesis PlumeStop, a suspension of activated carbon which was injected into the base of the Galligu. To enable the location and length of the treatment curtain to be designed and in particular to ensure the rate at which the groundwater would flow though the treated material, GEA formulated a groundwater flow model. However, the groundwater flow was occurring through a thin ’aquifer’ comprising a basal layer of ash and burnt mudstone at the base of the Galligu. This layer was of variable composition and thickness and was periodically penetrated by isolated columns of low permeability cement stabilised Galligu. It was therefore accepted that the accuracy of any model would be limited by the unavoidable uncertainties associated with the ground and this coupled with the difficulty of modelling the isolated no flow zones at each cement stabilised column guided the decision to not attempt to utilise a complex 3D digital groundwater flow model but to formulate a simple analogue scoping model. The modelling was carried out using conductive Teledeltos paper where the flow of an electrical current is used to model groundwater flow and measurements of the voltage drop across the model are used to assess the head drop across the site. This modelling indicated the zones of high hydraulic gradient that would develop around the gaps in the lines of cement stabilised columns and the likely extent of the hydrocarbon plume from the former tank farm. This information enabled Regenesis to design the PlumeStop curtain and was verified by groundwater level measurements within boreholes which were located in the areas indicated as being critical to the flow regime. 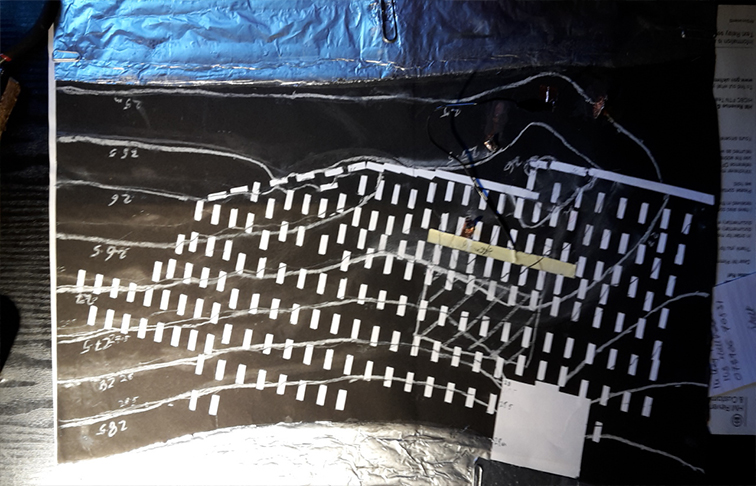 Following the PlumeStop injection, validation testing confirmed the success of the remediation and also highlighted the accumulation of hydrocarbon free product upgradient of the line of continuous cement stabilised columns in an area indicated by the modelling to be a ‘dead zone’ in terms of groundwater flow. GEA therefore specified installation of a passive LNAPL recovery system in a borehole in this area which removed the free product to a point where no detectable product was measurable.

All of the work was carried out following agreement with the Local Authority and the Environment Agency. The redevelopment successfully achieved the remedial aim of attaining significant environmental betterment and the site, which had remained derelict for more than 30 years is now in use as a Public House, coffee shop and public car park. Our approach also allowed the geotechnical challenges to be resolved, clearly demonstrating the benefits of a coordinated approach to contamination and foundation problems.

Donald Rumsfeld's "known knowns, known unknowns and unknown unknowns" phrase has become quite a favourite in presentations by geotechnical engineers...

The Association of Geotechnical & Geoenvironmental Specialists (AGS) has produced new guidance for the description of made ground.