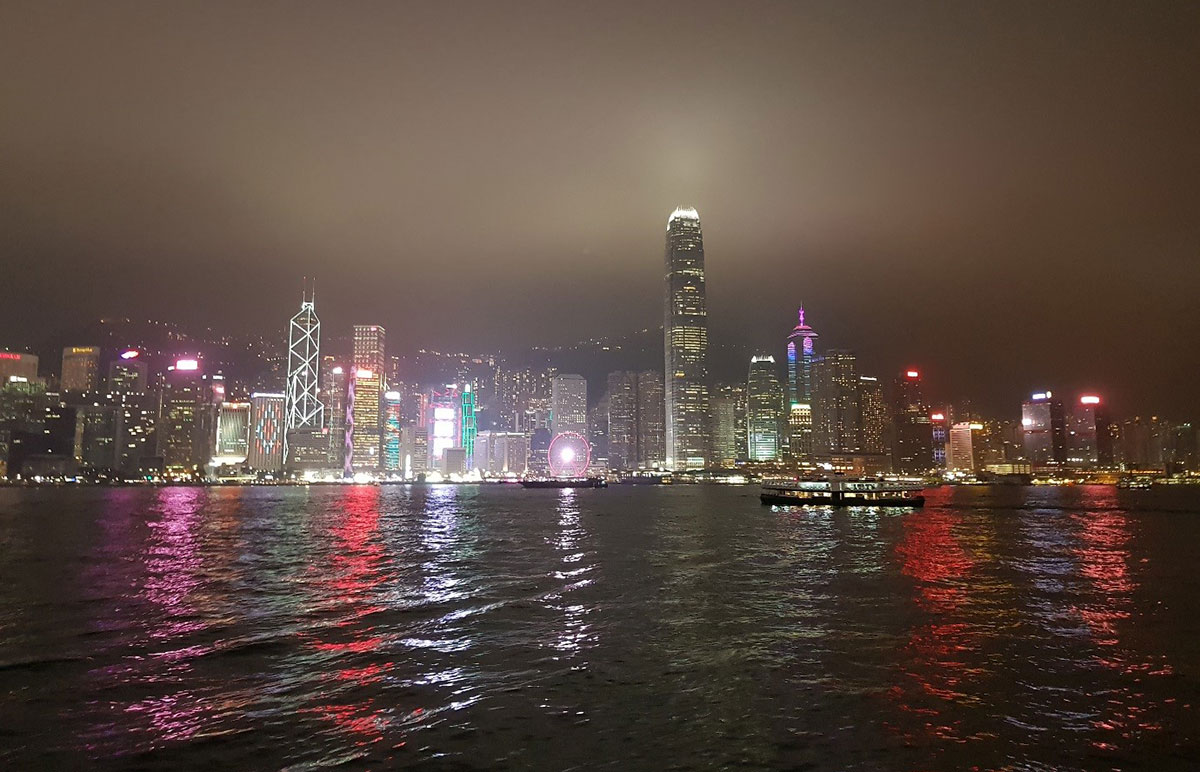 It is not often that great opportunities come along out of nowhere, but when they do, you have to take them. In early January, we were given the chance to join University of Portsmouth’s BEng Engineering Geology and Geotechnics annual study tour to Hong Kong. This is a fantastic aspect of the Portsmouth course, giving undergraduates insight into some of the most interesting and challenging ground engineering projects in the world. However, as the three of us - George Clifton, Lina Seoudi and Jordan Wood – had completed an MSc in Engineering Geology at Portsmouth we had missed out on this unique experience and were delighted when out of the blue it came our way. So of course we all jumped at the opportunity and before we knew it, we were jetting off around the world.

Hong Kong is a city like no other and is known for its incredible scale of construction projects. The city is densely populated and with limited space, so the only option seems to be to build upwards and excavate ‘outwards’ and downwards which has resulted in a number of major construction projects in the city and skyscrapers reaching 100s of metres. Hong Kong ranks as the city with the most completed skyscrapers that are taller than 150 m with 353. For comparison, New York City comes 2nd with a mere 273, and London 55th with only 19.

The first site we visited was probably the most similar project to one we would work on back in the UK with GEA. It was formerly a car park which is now being developed with a 34-storey hotel with a 15 m basement, all within a very small area and to add to the complications, two metro lines run beneath the site. When we visited, 28 piles up to 3 m in diameter were being installed. A recurring theme on the tour was that most of the construction was taking place on reclaimed land, and that was the case here as roughly 20 m of infilled soil was present from the surface, beneath which marine clays and localised alluvium deposits overlie completely decomposed granite (CDG) and lastly solid granite rock. It is common practice in Hong Kong to advance all piles completely through the perfectly competent CDG and into the granite rockhead beneath and in the case of this particular site, that meant piles up to 80 m long were required! While it may seem cheaper to design and use shorter piles, the delays caused if the design is not granted planning permission will result in significant costs and as such, developers prefer to pile to the rockhead. 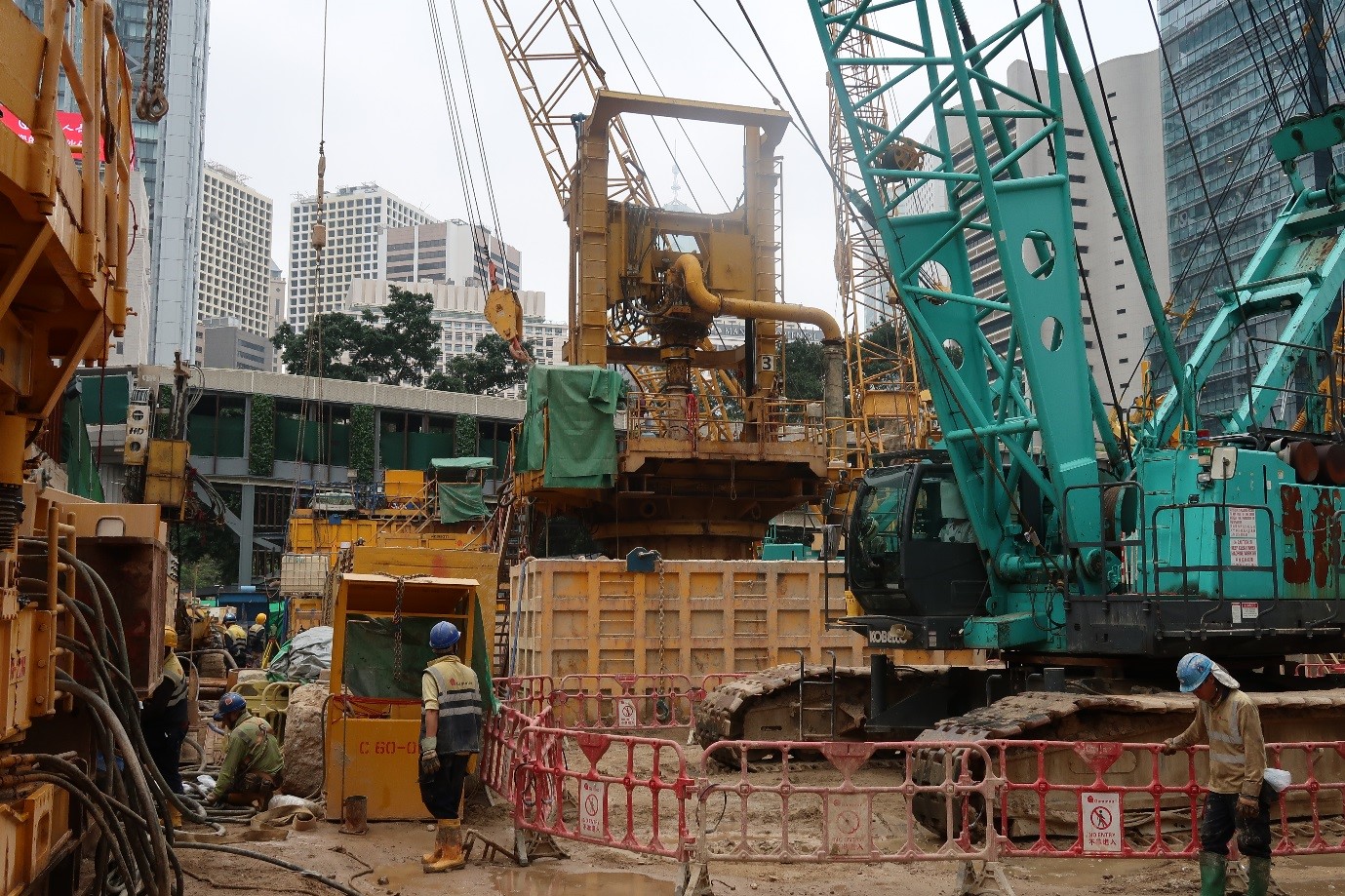 The second site of the day was much larger, albeit at a similar stage to the site visited that morning. During our visit, large diameter bored pile and sheet pile walls were being installed for a new technology park. We observed the massive pile casings and rebar cages, fossil rich marine clay being excavated to make way for the piles and a huge array of impressive plant utilised, for example a reverse circular drill. The most interesting take home from day 1 was how skin friction is essentially ignored when designing piles. Piles are designed based on end bearing capacities alone, regardless of skin friction using a very simple formula of ? r2 x 5000. To investigate the ground conditions and determine the level of the rockhead, a borehole is drilled in the position of each pile location, a luxury we could only dream of in the UK! For some additional comfort, piles are also underreamed into the rock.

On day two, we visited two sites for the same project, the Central Kowloon Route, a proposed underground highway beneath the Kowloon Peninsula. In the morning we visited the Ho Man Tin contract, which included a 100 m shaft to provide access to the proposed tunnel below. Excavation of the shaft had just commenced, half through soil supported by a diaphragm wall, and half through rock. There was also an ongoing massive site investigation for this section of the tunnel, consisting of 40 boreholes including vertical, inclined and directional drilling producing over 5000 m of core. A borehole is drilled along the entire route to allow logging of the entire tunnel with some of the longest boreholes reaching 1.2 km in length, quite a contrast to the level of ground investigation in the UK. 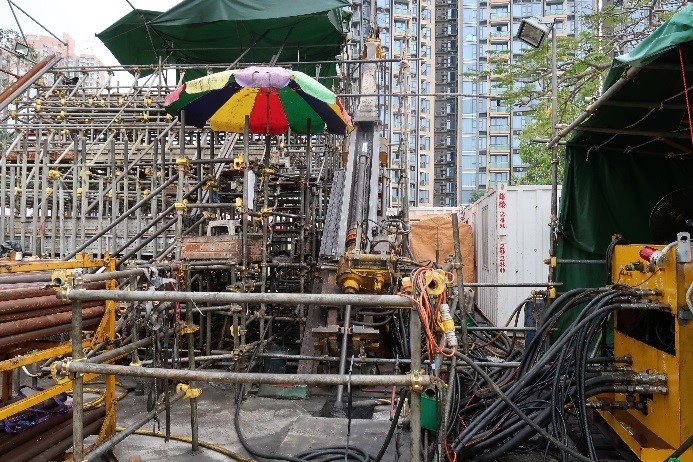 In the afternoon, we went on to the Kai Tak West Section of the route. This includes the construction of a 370 m long underwater tunnel and the associated temporary reclamation in Kowloon Bay. We were able to access a ventilation adit down to 19 m, allowing us to see the scale of the excavation supported by Gammon’s own clutch pipe piles and an extensive network of support struts! 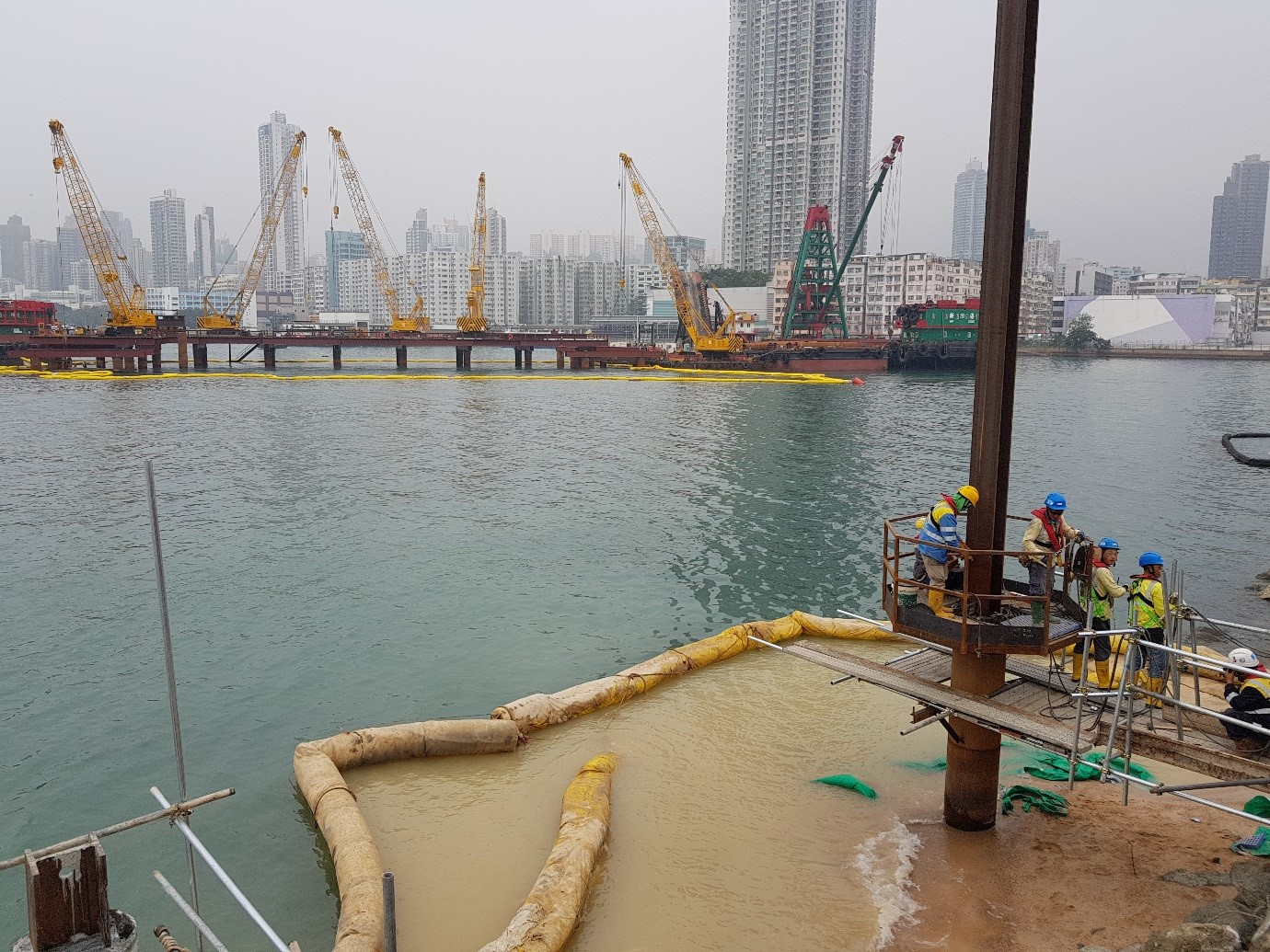 In the morning of day three, we visited a new metro station currently under construction beneath a major road junction in the busy Wan Chai district. The excavation for the station was 600 m long and 35 m deep, all dug out without closing any of the roads on the surface. When we visited, the last few metres of granite at the base was being excavated.

In the afternoon we went to the site of the new Lyric Theatre, a huge project currently under construction, along with a number of other large structures to be built in the area with the view of building a cultural quarter in the city. This site was newly reclaimed to build on, and initially involved the construction of a cofferdam and an ongoing extensive chemical grouting programme. The 20 m two-level basement associated with this building was essentially complete when we visited. The construction sequence involved the use of king post retaining walls to support the strut network and cut off walls using bored piles and clutch pipe piles.

The fourth day welcomed a nostalgic change as it was reminiscent of our former geological mapping days. In the morning, we headed towards Lantau Highway to meet Steve Williamson from AECOM to look at a series of debris flow barriers which have been constructed on the hillside above the town of Tung Chung. These barriers were erected following a devastating debris flow in 2008. At the time, a record 140 mm of rain was measured in a single hour, triggering approximately 400 landslides of varying scales across the region which resulted in the closure of the motorway for six months and the deaths of two people. The continued urbanisation of the area at the foothills stipulated the need for appropriate mitigation measures. We were told that following a lengthy geomorphological mapping exercise in extreme humidity and scorching temperatures, and amongst nightmare-inducing arachnids associated with such tropical climates, source areas were identified, along with critical narrow drainage channels with the potential to entrain eroded deposits. The barriers were subsequently constructed 10s of metres apart at the bottom of the cliff, comprising gabion walls surrounded by concrete walls with drainage outlets, in addition to a series of small baffles resembling a chessboard strategy. Each barrier is designed to withstand the impact of up to 3000 m3 of outwash material, although thankfully none have been tested thus far.

We returned to the Central Kowloon Route project in the afternoon. We visited Yau Ma Tei East site which is the cut and cover entry point for a 390 m long and 30 m wide tunnel section which will link up to the previously visited Ho Man Tin Shaft. At this site, the ground investigation was in progress, and we were able to see ongoing diaphragm wall trench excavations using either a steel chiseller or grabber extensions of a ‘Hydrofraise’. As with any government led project in HK, a borehole was being advanced for each of the D-wall panels, down to the level of the rockhead which can vary greatly in view of the tropical weathering of the granite.  The panels ranged from 2.8 m to 6.2 m wide reaching depths of around 25 m to 75 m, while a bentonite slurry maintained the stability of the deep trench walls during excavation. This site is located within a dense urban area, as such, a plethora of site constraints presented themselves including low headroom beneath nearby flyovers, the presence of a 1960s Grade II listed building (one of the city’s oldest) and a 132 Kv cable, in close proximity. All of this has resulted in the development of a complex Temporary Traffic Arrangement System which was designed to create as little disturbance as feasible to the bustling traffic system, and we can confirm that it actually works!

The fifth and final day was spent at one site, and it was definitely the most impressive on the trip, the Lam Tin - TKO tunnel project, which will result in the excavation of about 1.8 million m3 of material. The tunnel is being constructed using drill and blast and cut and cover methods, about 10 m away from a series of MTR lines. There were a number of items of specially designed plant on this site, the most prominent of which was a machine that moves along, shotcreting, waterproof and lining the tunnel excavation. The blasting of the rock face advances at a rate of about 5 m per day, a distinct dizzying smell of ammonia was noted here resulting from the blasting and as such the level is constantly being monitored. 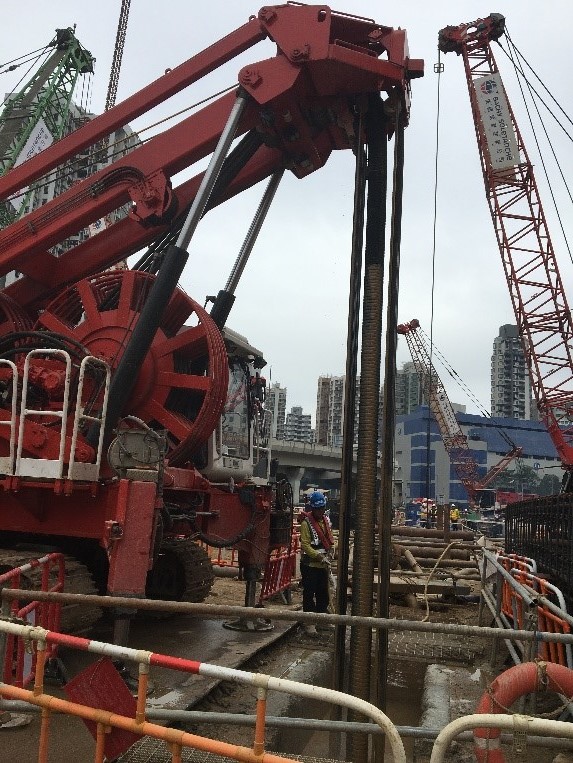 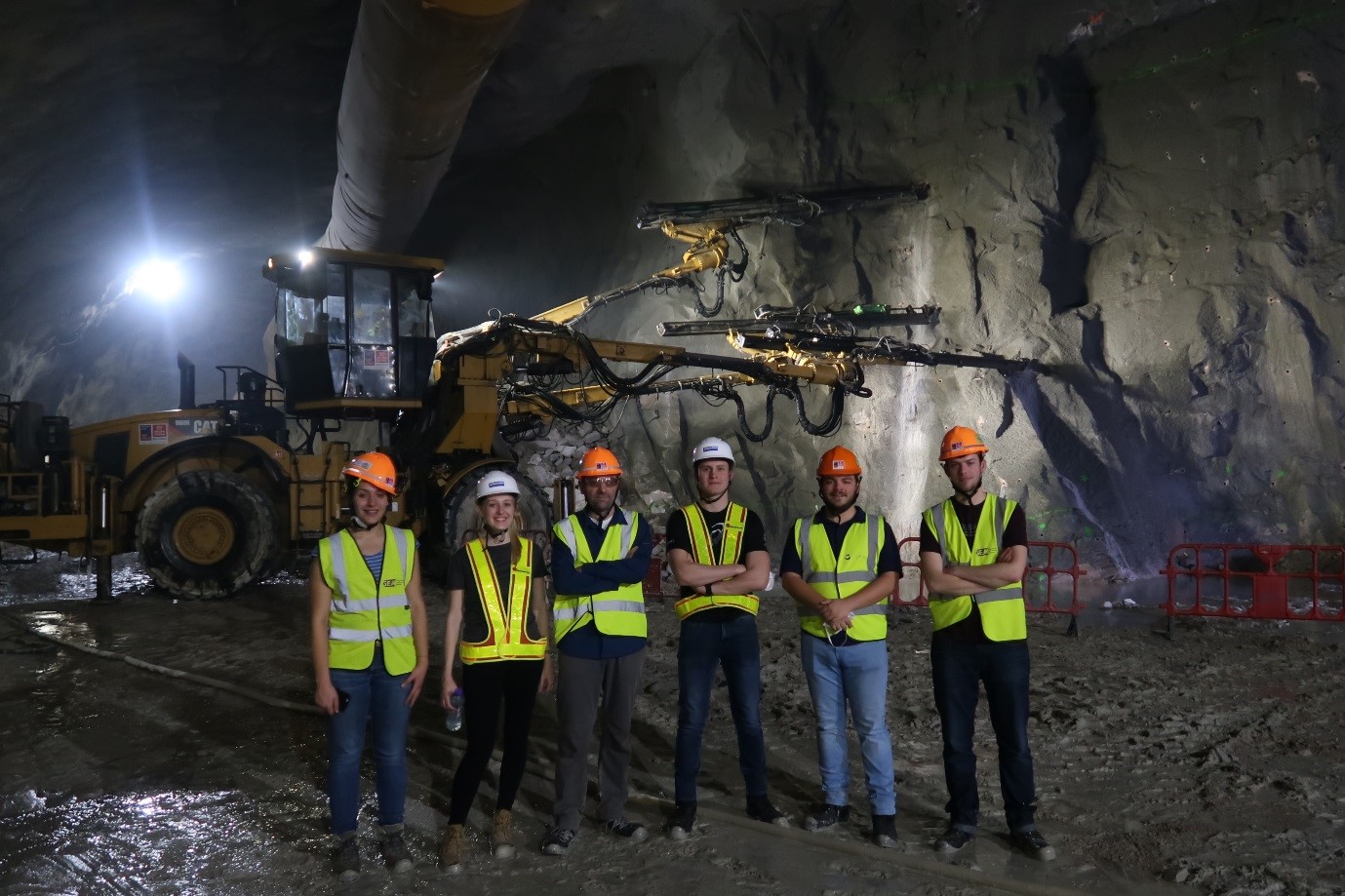 We will all undoubtedly follow these projects as they develop in the following decade - this was an incredible experience and needless to say our brains fire in new ways now. On a personal note, despite being already enamoured by the scale of the construction industry in Hong Kong, it was great to experience this different culture, from the incredible food throughout to seeing a giant panda on our last day, a marvellous end to a trip full of highlights. We would like to thank GEA for giving us such a unique opportunity, our former lecturer Dr Nick Koor for organising such a fantastic itinerary and to all of the lovely people we met while we were out there, some of whom are also engineering geology graduates from the University of Portsmouth.